The Cassandra Centre (formerly known as Cassandra Learning Centre) is a registered charity that was set up in 2007 after the tragic murder of Cassandra McDermott by her ex-boyfriend. Cassandra was 19 years old.

The Cassandra McDermott case made legal history in 2009, by being the first case to be trialed after the change in Double Jeopardy Law in 2005 of the 800 year old legal principle, that anyone acquitted by a jury could not be retried even if new evidence was uncovered.  The success of this was initiated after new and compelling evidence was produced and the case re-opened and brought to the Court of Appeals to overturn.

From this, Cassandra Learning Centre was born. We are a charity based in SW London, providing support to young people and families who have experienced domestic abuse. We also raise awareness of domestic abuse, especially relating to young people, and we educate both young men and women about the risks and signs of domestic abuse and offer much needed support to those in need of assistance.  We do this by running workshops in schools and colleges. Our SW London Center provides a safe haven for those seeking help and advice about domestic abuse and many other things.

Our motto: If it hurts; it isn’t love

We offer courses and workshops for young people:

Our Centre is located in Norbury, South West London and is split across two floors. We are fortunate that we have this space to enable us to deliver our activities. This enables us to offer support by hiring out some of our space to well vetted events as with the nature of our charity, we have to be extremely careful.

Our aim is to help and support as many people as we can, and we need your help in order to do this. We are a small team of dedicated Trustees, staff and volunteers.

Domestic abuse centre opened in Norbury in memory of Cassandra McDermott who was murdered by her ex-boyfriend.

Reported by Robert Fisk of the Swindon Advertiser in 2015 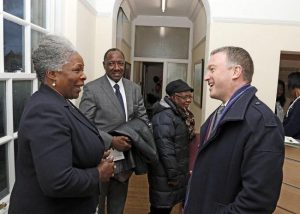 A charity set up in memory of a teenager killed by her ex- boyfriend has opened a centre in the town where she was killed.

The Cassandra Centre (CC), (formerly known as Cassandra Learning Centre) was opened in London Road, Norbury, 13 years after Cassandra McDermott, 19, was attacked at her mother’s house by Mario Celaire on October 25, 2001.

Celaire was found not guilty of her murder following a trial in 2002 but after new evidence came to light, he was the first person to be retried after the Double Jeopardy rules were abolished.

He pleaded guilty to the manslaughter of Cassandra at the Old Bailey on May 22, 2009.

Since Cassandra’s death the family has dedicated themselves to helping victims of domestic abuse, and CC worked with 200 people last year.

Cassandra Centre Chief Executive, Jennifer McDermott said: “Our family suffered a tragedy and, through our work at CC, I want to show that this will ultimately benefit others.  We will work to provide support to those in difficulty and teach young people the value of independence. I can think of no better way to honour my daughter’s memory.”

The centre aims to teach 13 to 25-year-olds life skills, and to build the strength needed to walk away from unhealthy relationships.